Letterman always spoke from the heart 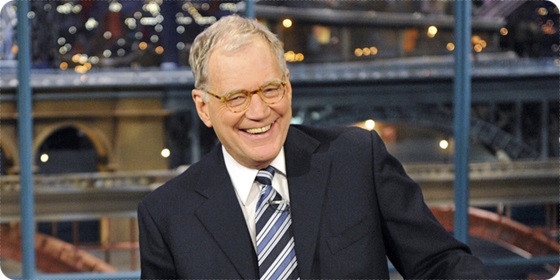 When Letterman had quintuple bypass surgery in 2000, removing doubt that there was a ticker in there somewhere, he introduced the doctors and nurses who cared for him. “So it was five weeks ago today that these men and women right here saved my life,” he said. He broke down, and a new Letterman emerged — one with better blood flow, more heart.

His desk was a bully pulpit. When John McCain “suspended” his presidential campaign and canceled his Late Show appearance in 2008, Letterman exposed him as a phony. When Jay Leno undermined Conan O’Brien’s Tonight Show two years later, Letterman called it “vintage Jay.” When he became the victim of a blackmail attempt, Letterman admitted to affairs with staff members and apologized to his wife, because Jack Dall’s No. 1 rule of show business is: Look ’em in the eye and speak from the heart.

But Letterman’s finest moment was his eight-minute monologue on Sept. 17, 2001, six days after the terrorist attacks of September 11.

“The reason we were attacked, the reason these people are dead …” he said. “As I understand it, and my understanding of this is vague at best, another smaller group of people stole some airplanes and crashed them into buildings, and we’re told they were zealots, fueled by religious fervor … and if you live to be a thousand years old, will that make any sense to you? Will that make any goddamn sense?”

David Letterman, late night talk show host for 33 years — first on Late Night (1982-93) and then Late Show (1993-2015) — the biggest television star since Johnny Carson and the “comedian broadcaster who is the best there ever was,” according to Jon Stewart, will retire Wednesday.

On CBS, every night at 11:35, Letterman has been as reliable as a public utility, a man who won’t be fully appreciated until he’s gone. He didn’t beat Jay Leno in the ratings, but by any real measure of greatness — originality, versatility, breadth of influence — he has no challengers. In the final season of The Larry Sanders Show, Rip Torn called Larry “one of those goddamn creatures out of Greek mythology — half-man, half-desk.” That’s Letterman.

But before CBS, before the Ed Sullivan Theater, before a 20-year-old Drew Barrymore danced on his desk and before he kissed Julia Roberts again and again, Letterman played host in a studio, at 12:30 in the morning on NBC.

Late Night with David Letterman was comedy anarchy. He wore suits made of Velcro and Alka Seltzer. There were theme shows like “Summer Time Sunshine Happy Hour” and “The Late Night Morning Show.” Top Ten lists and Stupid Pet Tricks became standards. Chris Elliott and Larry “Bud” Melman were odd supporting players. His best moments were storming General Electric’s corporate offices with a fruit basket and screaming via megaphone at Bryant Gumbel during a live Today Show: “This prime time program was my idea, and I’m not wearing pants!”

A stunning variety of guests visited Late Night — from the avant-garde like Sandra Bernhard and John Waters to human oddities like Pee-Wee Herman and Richard Simmons to his broadcasting equal Howard Stern. Letterman was confrontational with Charles Grodin and Harvey Pekar, and he delighted in annoying the delightful Teri Garr. Stand-up comedians like Richard Lewis and Bill Hicks proved their mettle. Jerry Lawler slapped Andy Kaufman and Cher called Letterman an “asshole.”

Letterman’s favorite guest may have been Jay Leno, who made more than 30 appearances on Late Night. The two came of age together at the Comedy Store in Los Angeles, writing jokes for Jimmie Walker. Leno’s agent later engineered the palace coup of Johnny Carson, making him host of The Tonight Show — Letterman’s lifelong dream. The controversy inspired a book and movie. Letterman and Leno, their relationship Shakespearean, their histories forever intertwined, have spoken only a few times since 1992.

With Saturday Night Live and then Late Night, the Baby Boomers had crashed the party. The first generation raised on television were now the hippest people on it. Letterman and Bill Murray — his first guest in 1982 and 1993 and one of his last this Tuesday — ushered in the Age of Irony. They mocked show business sincerity. On television and in life, there are those who speak with tongues-in-cheek while keeping a straight face. They are aping Letterman.

Jimmy Kimmel, Conan O’Brien, Jon Stewart and Stephen Colbert all worship at the Altar of Dave. Kimmel celebrated his 16th birthday with a Late Night cake, and the license plate on his first car read “L8 NITE.” Letterman “was more important than sleep,” he said. Conan said Late Night was “wrong” — but in all the right ways. Stewart invited Letterman to be the last guest on his short-lived MTV talk show. Stephen Colbert, who will replace Letterman on Sept. 8, said of college: “I learned more from watching Dave than I did from going to my classes.”

My favorite thing ever produced on Late Night was “They Took My Show Away,” a goof on those old ABC afterschool specials.

The short film was about Jimmy, a young boy who is heartbroken by the cancellation of Voyagers, his favorite television show. Letterman breaks the news to him.

DAVE | Do you know what it means for a show to be canceled, Jimmy?

DAVE | Well, it’s when a bunch of executives at a television network decide that a TV show shouldn’t be on the air anymore, and then they take it off and replace it with something new. Sometimes that’s a good idea, because the show is filled with bad acting and bad writing, and sometimes it’s the executives who have been bad.

JIMMY | This canceled business — it could never happened to Voyagers, could it?

Jimmy runs away, and when Letterman finds him, he is ripping up a TV Guide. This was Late Night at its best, making fun of television and honoring it all at once.

DAVE | Jimmy, don’t ever say that. Not even as a joke.

But life is not an afterschool special.

They took my show away.