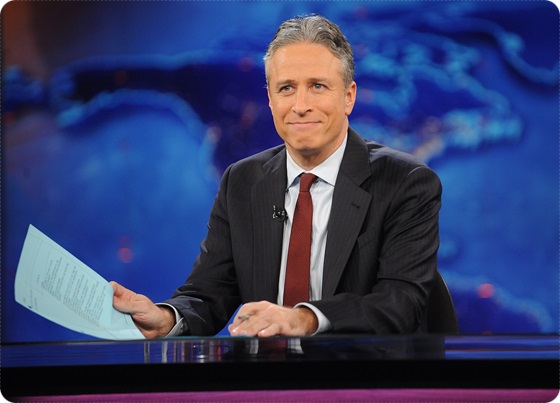 Jon Stewart’s first talk show debuted on MTV in 1993, an alternative mash-up of interviews, musical guests and sketches — including the recurring “Talk Show Jon” in which Stewart voiced an action figure of himself. His guests were the young and hip, Conan O’Brien and Quentin Tarantino, Claire Danes and Alicia Silverstone, Notorious B.I.G. and Marilyn Manson.

After the first season, Paramount syndicated The Jon Stewart Show, using it as a replacement for the canceled Arsenio Hall Show. The show was a hit on MTV, but not in syndication.

Stewart announced its cancellation on Late Show with David Letterman in 1995. Letterman appeared on Stewart’s final show, bringing a clip from his failed morning show, which lasted four months in 1980. He also shared with Stewart a fitting homily: “Cancellation should not be confused with failure.”

Stewart was the top prospect in late night — even on the fictional The Larry Sanders Show (1992-98), Garry Shandling’s knowing deconstruction of show business. Stewart played himself, a frequent guest host for Sanders. In the final season, the network threatens to replace Sanders with Stewart unless he updates the show.

The following year, Tom Snyder retired from The Late Late Show — which followed Letterman on CBS — creating an opening in late night. But Worldwide Pants, Letterman’s production company, chose The Daily Show host Craig Kilborn over Stewart. Some members inside the company were appalled by the selection, because Kilborn was the lesser talent. Those outside speculated that Letterman and his producers passed on Stewart, because he was a younger, hipper version of Dave, someone who might generate talk of succession.

The Daily Show was second-rate, just the best late night job available, but Stewart transformed it into a cultural touchstone and appointment viewing for news junkies, comedy fans and young progressives. Over the past 16 years and four presidential elections, Stewart — whose last show is Thursday — became the leading voice of the political left, his show a watchdog organization for government hypocrisy and cable news incompetence, especially Fox News.

He was a relentless media critic. When MSNBC’s Chris Matthews appeared to promote his book Life’s a Campaign, Stewart said: “I’m not trashing your book. I’m trashing your philosophy of life.” When CNBC’s Jim Cramer defended himself against his endorsement of Bear Stearns after the firm’s collapse, Stewart pulled clip after clip, exposing him as just another stock market tout. Stewart enjoyed a friendly rivalry with Bill O’Reilly, making numerous appearances on his show and once debating him for 90 minutes.

But Stewart’s zeitgeist moment was his appearance on Crossfire in October 2004. While there to promote America (The Book), he instead dismantled the caustic CNN show and those like it, pleading with hosts Tucker Carlson and Paul Begala to “stop hurting America” and calling them “partisan hacks.” When network CEO Jonathan Klein canceled the show eight months later, he was “firmly in the Jon Stewart camp.”

The Daily Show became a comedy franchise, producing two spin-offs — The Colbert Report (six Emmys) and The Nightly Show with Larry Wilmore — and a depth of talent. Stephen Colbert will replace Letterman in the fall. John Oliver’s stint as guest host earned him a similar show on HBO. Steve Carell’s resume is extraordinary: The Office, The 40-Year-Old Virgin and Foxcatcher for which he received an Academy Award nomination. Ed Helms joined Carell on The Office and played the neurotic one in the Hangover movies. Rob Corddry made Adult Swim’s Childrens Hospital.

The Daily Show won 18 Emmys and two Peabody Awards — one each for its Indecision 2000 and Indecision 2004 election coverage. But the show’s more important wins were the two decisive ones by President Obama in 2008 and 2012. Stewart deserves an assist on those. He hosted Obama seven times on The Daily Show. He made a generation of young voters more interested in politics and more interested in the idea of an Obama presidency.

Stewart did something else that should not be overlooked: He made being liberal cool again. It was no longer a dirty word. Again and again, he explained in detail the merits of a liberal idea — government healthcare, gun control, gay marriage — and made them sound like common sense.