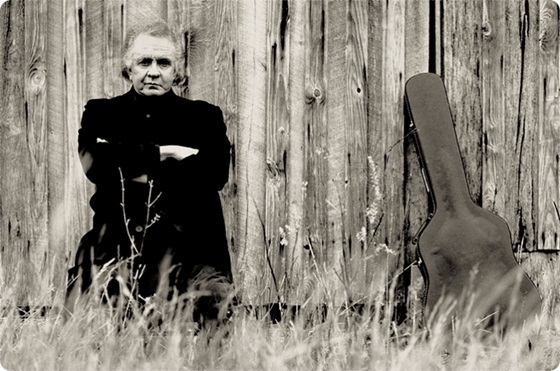 By the early 1990s, Johnny Cash had spent almost two decades in creative and commercial decline, playing in front of disappearing audiences at banquet halls and dinner theaters. He had been dropped by both Columbia and Mercury Records. Next stop: Branson.

Enter record producing buddha Rick Rubin. Drop the needle on the greatest comeback in the history of popular music — and I don’t mean maybe.

But he wanted to work with a mature artist, a great old artist who had not been doing their best work. Rubin approached Cash.

The result was American Recordings, a stripped-down Johnny Cash, and the closest he had come to his earliest work at Sun Records. The album was universally praised, winning a Grammy for Best Contemporary Folk Album. “Delia’s Gone,” the album’s controversial first single, made MTV’s rotation.

It became fashionable to say that Johnny Cash was cool. Or cool again. Which was, of course, complete bullshit. Because a man and his guitar, with a Biblical voice, wearing black, standing up for what’s right, never stopped being cool. Because Johnny Cash was the walking, talking definition of cool.
— Kevin Brewer

American Recordings might be the most handmade, most organic, most Johnny Cash album of them all. It was recorded in Cash’s Tennessee cabin, Rick Rubin’s living room and The Viper Room in Los Angeles. No studio. Cash, in his autobiography: “We experimented with added instrumentation, but in the end, we decided that it worked better with me alone. We bore down on it that way and got our album: no reverb, no echo, no slapback, no overdubbing, no mixing, just me playing my guitar and singing. I didn’t even use a pick; every guitar note on the album … came from my thumb.” Essential tracks | “Delia’s Gone,” “Drive On,” “Tennessee Stud”

A noisy masterpiece that belongs on the Generation X teen angst shelf next to Slacker, My So-Called Life, Elizabeth Wurtzel’s Prozac Nation and actual Prozac. Or maybe “Lithium.” Kurt Cobain said he wanted Nevermind to sound like “The Knack and the Bay City Rollers getting molested by Black Flag and Black Sabbath.” The sound was grunge — garage rock from Seattle, flush with power chords, pop hooks and inaudible lyrics. Nevermind was depressing and life-affirming, led by the zeitgeist-capturing “Smells Like Teen Spirit.” Millions of kids picked up guitars and wore flannel because Nirvana looked inward and raged outward. Here we are now. Entertain us. Essential tracks | “Smells Like Teen Spirit,” “Come as You Are,” “Lithium,” “In Bloom”

This entry is a cheat. Public Enemy’s third and fourth albums — released 18 months apart — weren’t conceived as companion pieces, but that’s how I listened to them in college.

Newsworthy times capsules and timeless calls to action, with Public Enemy’s trademark relentless sirens, throbbing bass and propulsive drum tracks. Chuck D called rap “black America’s CNN,” and Fear of a Black Planet and Apocalypse 91 cover everything in 115 minutes: white media, black media, black radio stations, Nike, Hollywood and the MLK holiday controversy in Arizona. Even hype man Flavor Flav turns serious on “911 Is a Joke,” and “A Letter to the New York Post.” But the one-two punch is also an editorial, what black people should do now: “Brothers Gonna Work It Out,” “Power to the People” and “Fight the Power.” Essential tracks | “Fight the Power,” “Welcome to the Terrordome,” “Can’t Truss It,” “Shut ‘Em Down,” “Bring Tha Noize” (w/ Anthrax)

Dr. Dre’s solo debut, his emancipation proclamation from N.W.A. and Ruthless Records. He produced the album, released it on his own label and introduced hip-hop’s next great MC: Snoop Doggy Dogg. The Chronic mixed smooth samples of George Clinton’s Parliament-Funkadelic and gangsta takedowns of former N.W.A. frontman Eazy-E and Ruthless founder Jerry Heller. Snoop wrote and rapped on most of the 16 tracks, his Long Beach drawl the just-right complement to Dre’s righteous anger. The album’s title is slang for top-notch cannabis, its cover art an homage to Zig-Zag rolling papers, and inside was a high-level education on bitches, 16 switches and all things Compton. Essential tracks | “Nuthin’ but a G Thang,” “Dre Day,” “Let Me Ride”

White man’s funk from Southern California, a pastiche of hip-hop, folk and country, garage rock and bossa nova, produced by the Dust Brothers. Beck was music, and the music was in him. He sang of the “jig-saw jazz” and “get-fresh flow.” He was not any genre, but every genre. He was not from any era, but every era. He was acoustic, electric and remixed. The way he moved and grooved was completely original. Beck was a hipster Prince, credited with playing 16 instruments on Odelay, including four kinds of guitar and a few that sounded made-up: clavinet, moog synthesizer, rhumba box and echoplex + two turntables and a microphone. Essential tracks | “Where It’s At,” “Devil’s Haircut,” “The New Pollution”

Rougher, tougher and more fun than the acoustic American Recordings, capturing some of the boom-chicka-boom of Johnny Cash’s early work. Rick Rubin produced an All-Star band, with Tom Petty and the Heartbreakers backing every song and Flea, Lindsey Buckingham and Mick Fleetwood making special appearances. Cash covers Petty’s “Southern Accents,” Soundgarden’s “Rusty Cage” and Beck’s “Rowboat.” But as Cash said in the liner notes: “If I can’t make these songs my own, they don’t belong.” Unchained won a Grammy for Best Country Album, without the support of country music radio stations. Cash fingered the injustice with a full-page ad in Billboard magazine (below). Essential track | “Rusty Cage” 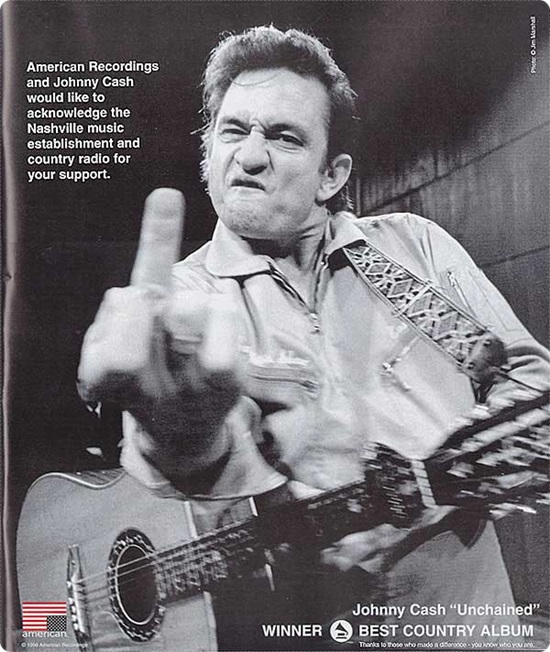 The prettiest sound in the history of grunge. On Dec. 16, 1993, at Sony Music Studios in New York, on a stage decorated with stargazer lilies, black candles and a crystal chandelier, Nirvana appeared on MTV Unplugged. This wasn’t fan service or a promotion for a greatest-hits package. Kurt Cobain’s set list was personal, his voice intimate. Just 14 songs, four from Nevermind, three from In Utero, one from Bleach and six covers, including Lead Belly’s “Where Did You Sleep Last Night.” No filler, no encore. Four months later, Kurt Cobain died from a self-inflicted shotgun wound to the head. He was 27 years old.

MTV Unplugged in New York was released seven months after Cobain’s death. It debuted at No. 1 on the albums chart, sold more than five million copies and won the Grammy for Best Alternative Music Album. Nirvana Unplugged lives forever. Essential tracks | “Where Did You Sleep Last Night,” “About a Girl”

Ice Cube’s reportage of the 1992 Los Angeles riots, released seven months after four LAPD officers were acquitted for use of excessive force in the arrest and beating of Rodney King, which was videotaped and watched by everyone in the country. Offenders are name-checked, warnings dispensed:

Since 1992, there have been riots or civil unrest in response to the murder of unarmed African American men by police officers in St. Petersburg, Fla., Cincinnati, Oakland, Anaheim, Brooklyn, Ferguson, Mo., Baltimore, St. Louis, Milwaukee, Charlotte and on and on. “I’ve given so many warnings,” Ice Cube says in “Fuck ’Em.” Essential tracks | “It Was a Good Day,” “Check Yo Self,” “Wicked”

Garage rock with a sense of humor, grunge from Greensboro, North Carolina. A less violent Violent Femmes. Bicycle Face (1988-94) was a moment in time: one album, several 7-inches. But if you lived in Greensboro or parts unknown in North Carolina or knew a guy who knew one of the guys, then you know that Mitchell McGirt was a smart-ass Ray Davies, Brian Huskey was funny before Adult Swim and Christopher Longworth (drums, broken tuba, dropped trash) kept them both moving. The compilation Remastered Bastards (2008) collects “Irrelevant” and “Speck o’ Dust,” which are not on Trust and Obey. I used them both in a television production in college. Essential tracks | “Teenage Identity Song,” “Ballad of Humanity,” “I’m the Devil (and You’re Not)” Available | eBay

Two albums released on the same day, two versions of “Don’t Cry,” covers of “Live and Let Die” and “Knockin’ On Heaven’s Door” and a trilogy of music videos starring supermodel Stephanie Seymour. The Use Your Illusion albums were rock and roll excess: a 30-song, 152-minute offensive, full of rage, rock opera ballads like “November Rain” and personnel changes, with Axl and Slash fighting over the sound mix until the end. Slash compared the double shot to the Beatles’ “White Album,” although “maybe not as good.” Maybe not, but “The White Album” didn’t have “Coma,” a 10-minute song about a drug overdose with hospital sound effects. Essential tracks | “November Rain,” “Don’t Cry,” “You Could Be Mine,” “Don’t Damn Me”

Risque Rhythm: Nasty 50s R&B (1991) A collection of bawdy rhythm & blues songs, every title a double entendre, every lyric an invitation to bump, each note a command to grind.

The Best That I Could Do 1978-1988 (1997) John Mellencamp. Jim Miller (Newsweek, 1986): “Mellencamp has pulled off an almost impossible feat: he has taken some of the most elementary facets of old-fashioned rock — its romance, its implicit promise that any kid can make his mark, its youthful air of adventure — and made them seem brand new.”

The Ultimate Collection (1997) Jr. Walker & the All-Stars. The most underappreciated and raucous of all the great Motown acts.

Whenever We Wanted (1991) John Mellencamp

On How Life Is (1999) Macy Gray
Email ThisBlogThis!Share to TwitterShare to FacebookShare to Pinterest