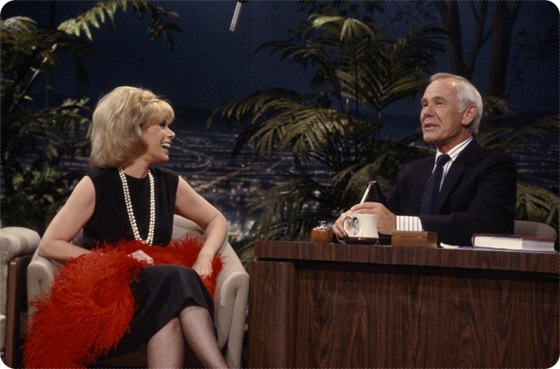 Joan Rivers was as relentless as her comedy.

“I’ll show you fear,” Rivers says in the 2010 documentary A Piece of Work as she points at an empty date book. “That’s fear. If my book ever looked like this, it would mean nobody wants me, that everything I ever tried to do in life didn’t work, nobody cared, and I’ve been totally forgotten.”

That never happened, because she never stopped working. Rivers hosted the long-running E! network’s Fashion Police and an online talk show In Bed with Joan, starred in the reality series Joan & Melissa: Joan Knows Best? with her daughter and wrote Diary of a Mad Diva, which she promoted on more than a dozen talk shows — and that was this year alone. Her upcoming stand-up tour was to be called “Before They Close the Lid.” More than 20 dates were scheduled

The indefatigable Rivers died Thursday. She was 81 years old.

On Feb. 17, 1965, when Rivers was 31 years old, she made her first appearance on The Tonight Show starring Johnny Carson. She wore a black Jax dress, a string of pearls and a pink boa. She told jokes about being single and problems with her car. “God, you’re funny,” Carson said on the air. “You’re going to be a star.”

A month later, Rivers was the lead guest on the show and quickly became one of Carson’s favorites, making more than 50 appearances. In 1983, she became the first permanent guest host of The Tonight Show. Three years later, she signed a five-year, $15 million contract with the new Fox network to host her own show.

“The first person I called was Johnny Carson,” Rivers said in A Piece of Work. “He slammed the phone down. I called him again, and he slammed it down again and never spoke to me again — ever.”

Rivers told this story so often and with such conviction that it became accepted as truth, mostly because Carson never spoke of Rivers publicly, except for a few veiled references in his monologue, and partly because Rivers outlived him by nine years.

But Carson already knew of Rivers’ impending move when she made the call, according to King of the Night by Laurence Leamer. Her mistake, Carson felt, was in not telling him sooner. If she had, Carson might have wished her well on the air, as he had done with David Brenner and Alan Thicke and later with Pat Sajak and Arsenio Hall when they began their competing shows.

“I’m not taking her call,” Carson said. “It was a little late in arriving … about three months late.”

In the following months, Rivers tried to hire away some of Carson’s top personnel, including longtime producer Peter Lassally and a highly regarded talent coordinator. Carson gave them more money to stay.

The Late Show starring Joan Rivers premiered on Oct. 9, 1986 at 11 p.m., a half-hour before Carson. Her guests were David Lee Roth, Pee-wee Herman, Elton John and Cher. John, Cher and Rivers sang “The Bitch is Back.” Rivers beat Carson in the ratings in New York and San Francisco.

“The Fox show, even before we went on the air, was a nightmare,” Rivers said. Her husband, manager and executive producer, Edgar Rosenberg, constantly fought with Fox executives Rupert Murdoch and Barry Diller. When Rivers refused to fire her husband, Fox fired both of them. Her last show was on May 15, 1987.

Three months later, Rosenberg committed suicide. “He left me with no career and a lot of debt,” said Rivers, who became depressed and bulimic and contemplated suicide herself.

Then Rivers worked. She was the center square on Hollywood Squares (1987-89) and hosted a daytime talk show (1989-93) for which she won an Emmy. In 1994, she was nominated for a Tony Award for playing Lenny Bruce’s mother in Sally Marr … and Her Escorts. She wrote 12 books, including one about her many plastic surgeries. She peddled her own line of jewelry and clothing on QVC, selling more than $1 billion in merchandise. She was omnipresent on the red carpet of awards shows for E! and later the TV Guide Channel. She won Celebrity Apprentice.

On Jimmy Fallon’s first night as host of The Tonight Show in February, a series of celebrities made cameos, handing him $100 to settle a bet — Robert De Niro, Tina Fey, Seth Rogen, Stephen Colbert … and on and on. Among them was Rivers, making her first Tonight Show appearance since 1986.

A month later, she returned, making jokes about the Holocaust and vagina rings. Fallon held up a black and white photo of Carson and Rivers from that first appearance in 1965. “He said you’re going to be a star,” said Rivers, pointing at Carson in the photo. “It changed my life.”