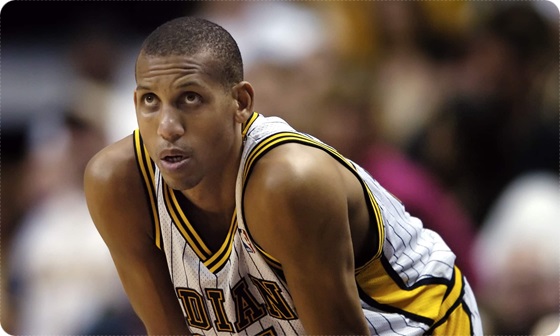 One of the best clutch shooters of all time couldn’t even walk correctly as a child because of pronated hips, so he wore braces on his legs for five years.

He spent much of his career being called the second-best player in his family. His sister is Cheryl Miller.

He was booed when he was drafted by the Indiana Pacers because the hometown fans wanted Indiana Hoosiers star Steve Alford.

But Reggie Miller kept coming for 18 seasons, kept picking up his scrawny 6-foot-7, 190-pound frame up off the floor, kept running off screen after screen to hit more 3-pointers than anyone in NBA history and clutch shot after clutch shot.

Indeed, the Miller highlight reel is a long one.

In Game 5 of the 1994 Eastern Conference finals, he scored 25 points in the fourth quarter, taunting Spike Lee after every shot in a 93-86 win over the New York Knicks.

The following season, in Game 1 of the conference semifinals, Miller scored eight points — two 3-pointers and two free throws — in 8.9 seconds in a 107-105 win over the Knicks.

Later that year, Miller released his autobiography: I Love Being the Enemy.

In 1998, he finally met Michael Jordan — that other clutch player — in the playoffs. In Game 4 of the conference finals, Miller hit the game-winning 3-pointer with 2.7 seconds left, but Jordan’s Bulls won the series in seven games.

In 2000, Miller averaged 31 points in the clinching games of each Eastern Conference playoff series to lead the Pacers to their first NBA Finals, where he averaged 29.5 points in the last four games as the Pacers lost to the Lakers in six games.

Miller never did win a championship. He never left for a bigger market either, remaining loyal to old-fashioned Indianapolis — even after his $2 million home was burned to the ground in 1997.

The blessing has been Indiana’s. Miller has come to define the basketball-obsessed state as much as Bob Knight or Larry Bird.

This is Miller’s last season, and he planned to spend it like he has the last few, tutoring future stars Jermaine O’Neal and Ron Artest.

But O’Neal is injured and Artest is suspended for the season, so the 39-year-old Miller is back, averaging 14.6 points, leading the league in free throw shooting and playing his position as no one his age has.

There he is, running off screen after screen, hitting 3-pointers and clutch shots. Here’s hoping there’s something left in the highlight reel.
— Kevin Brewer

This article originally appeared in The Washington Times on April 12, 2005.
Email ThisBlogThis!Share to TwitterShare to FacebookShare to Pinterest
Labels: Reggie Miller