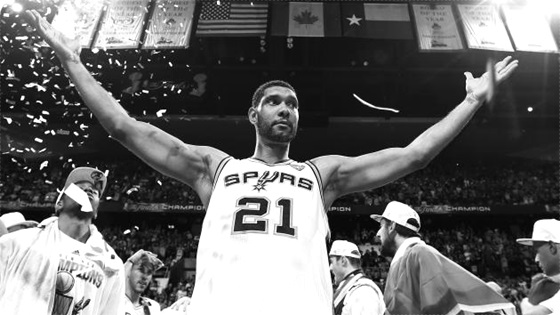 No farewell tour. No essay on The Players’ Tribune. No press conference.

Tim Duncan retired on Monday. His way. Like a man. The strong, silent type. A 6-foot-11 silhouette against the San Antonio sunset.

The Spurs announced his retirement in a press release. There was no comment from Duncan.

Just the facts: two MVP awards, 15 All-Star selections, 15 All-NBA teams, 15 All-Defensive teams. He is the consensus choice as the greatest power forward of all time and the greatest two-way player in modern history.

Duncan was the defining player of this century’s first decade. Shaquille O’Neal and Kobe Bryant won more championships. Dirk Nowitzki and Kevin Garnett amassed more win shares. But by any real measure of greatness — offense and defense, team play and consistency — Duncan towered over the competition.

Duncan was the San Antonio Spurs. He led them to five championships and 17 straight 50-win seasons. He is the only player to win 1,000 games with one team. Duncan and Gregg Popovich have the most wins by a player-coach combination in league history. He is the team’s all-time leader in points, rebounds and blocked shots.

Duncan — who won the Rookie of the Year award — and Robinson were the most accomplished twin towers combination of all time. Duncan at the high post, Robinson down low. They played together for six seasons, winning two championships.

The Spurs reloaded. They drafted two foreign players — Manu Ginobili with the 57th overall pick in 1999 and Tony Parker with the 28th in 2001 — and won two more titles in three seasons. Duncan, Ginobili and Parker won more playoff games than any other trio in history.

Duncan played fewer minutes in his 30s, which stunted his statistics. Popovich rested him in fourth quarters and selected regular season games with long playoff runs in mind, introducing the idea of a “healthy scratch” in basketball. But the Spurs missed the NBA Finals in five consecutive seasons, losing twice in the first round — once to the eighth-seeded Memphis Grizzlies.

When they returned in 2013, the Spurs lost to the Miami Heat’s super team of LeBron James, Dwyane Wade and Chris Bosh. Duncan missed a possible game-tying layup in the final minute of Game 7. He slapped the floor in frustration. “Game 7 is always going to haunt me,” he said.

The Spurs exorcised the pain the following season. They beat the Heat in five games with a 14.0 average margin of victory.

Even his nicknames were boring. The Big Fundamental, Groundhog Day and Old Man Riverwalk. Duncan was beyond nicknames — a desperate attempt to color what is gray.

Duncan was so good for so long while saying so little that bland became his brand.

He was a public person who remained private. Reclusive. Unknowable.