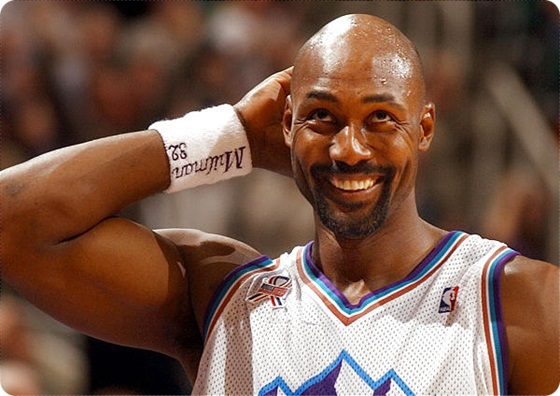 When Karl Malone was drafted by the Utah Jazz in 1985, he wore a mismatched blue blazer with white pants. He was 21 years old, from Summerfield, La., country as a chicken coup. He couldn’t shoot, and he couldn’t pass.

Then he outworked everybody in the league.

Malone announced his retirement Sunday, and this is his body of work — all 6-feet-9, 256 pounds of it, chiseled to perfection: 36,928 points (second all time), 14,968 rebounds (sixth all time), two MVP awards, two Olympic gold medals, 11 All-NBA first-team selections.

A couple superlatives will follow Malone into retirement. Best power forward of all time. Best player to never win a championship.

Malone, known as the Mailman for his dependable finishes at the rim, delivered for 19 seasons.

He didn’t have the same natural talent or feel for the game as his transcendent contemporaries: Magic Johnson, Larry Bird, Michael Jordan, Isiah Thomas.

Malone was the unnatural. He had to work at it, and he refused to be outworked.

He teamed with point guard John Stockton, and theirs was a perfect fit. They ran the pick-and-roll over and over until it came to symbolize basketball at its most efficient.

At 32, Malone already was a Hall of Famer after averaging at least 25 points and 10 rebounds for nine consecutive seasons. He could pass. He could shoot.

But he had not won a championship, that most ridiculous albatross endured by the modern athlete. In fact, Malone had just blown a chance to reach his first NBA Finals, missing two late free throws in Game 7 of the 1996 Western Conference finals.

His window of opportunity was closing, the cliché went. It made some sense. NBA players don’t do much after the age of 32.

Malone did. He won two MVP awards, the second at age 36, becoming the oldest player to be so honored.

He led the Jazz to two NBA Finals, losing both times to Michael Jordan’s Bulls. The second, in 1998, was especially cruel, as Jordan stole the ball from Malone in the closing seconds of Game 6.

He made a third Finals appearance last season as the glue holding together the fractured Los Angeles Lakers. But as Malone’s body faltered, so did the Lakers.

Malone announced his retirement in a cowboy hat and tight-fitting T-shirt that showed off his muscles. He looked like he belonged.
— Kevin Brewer

This article originally appeared in The Washington Times on February 15, 2005.
Email ThisBlogThis!Share to TwitterShare to FacebookShare to Pinterest
Labels: Karl Malone