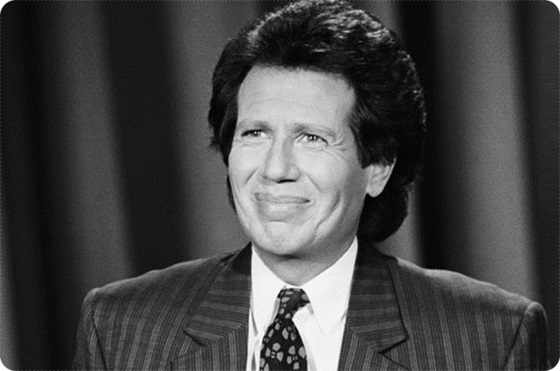 Garry Shandling was meta comedy before it was the term of art, playing himself and later the show business version of himself in two classic television comedies.

He spoke directly to the camera on It’s Garry Shandling’s Show (1986-90), a knowing deconstruction of the sitcom, introducing and closing each episode, and encouraged audience participation. Two years later, he played a neurotic talk show host on The Larry Sanders Show (1992-98), a realistic look behind the curtain of a fictional late night talk show, inspired by his experiences as a guest and guest host on The Tonight Show starring Johnny Carson. The two series received a combined 60 Emmy nominations.

Shandling was also a Buddhist and a Buddha to a generation of younger comedians. “It’s all right not to know,” he told GQ in 2010. “Just calm down a minute. I give you permission to not know. That’s the key. Only from there can come answers.”

Shandling began his career writing sitcoms — four episodes of Sanford and Son and one Welcome Back, Kotter — but was frustrated by the formulaic nature of the medium.

That ended in 1977, when he was 27 years old. Shandling was hit by a car, leaving him in critical condition with a crushed spleen for two days. He laid in the hospital for two weeks. Then he decided to become a stand-up comedian.

“I had a vivid near-death experience,” he later wrote, “that involved a voice asking, ‘Do you want to continue leading Garry Shandling’s life?’ Without thinking, I said, ‘Yes.’ Since then, I’ve been stuck living in the physical world while knowing, without a doubt, that there’s something much more meaningful within it all. That realization is what drives my life and work.”

The ability to transform himself, through will and meditation and a desire to not repeat himself, would become a recurring theme in Shandling’s career.

His persona as a stand-up comedian was neurotic and whiny with smart observations about life, particularly life as single man:

Shandling had big teeth and lips and was self-conscious about his hair, but he rose quickly, making his first appearance on The Tonight Show in 1981 and the Showtime special Garry Shandling: Alone in Vegas in 1984. By the time he made The Garry Shandling Show: 25th Anniversary Special — an homage to the talk show genre — in 1986, he was the permanent guest host of The Tonight Show.

Shandling was a possible successor to Carson, but he gave up his guest hosting spot to Jay Leno in order to make It’s Garry Shandling’s Show for Showtime. The series was one big in-joke about sitcom conventions — from its theme song that began, “This is the theme to Garry’s show,” to Shandling’s canned announcement of guest stars to the set, which was supposedly an exact representation of his condo in Sherman Oaks, Calif.

There is an iconic photo of Shandling standing between Letterman and Leno with Johnny Carson — all in tuxedoes on the occasion of Carson’s 26th anniversary special in 1988. The three of them would dominate late night television in the 1990s: Letterman on CBS, Leno on NBC and Shandling on HBO’s The Larry Sanders Show.

Shandling’s second series was a revelation. While the on-air interactions would have fit right in on any other late night show, Larry Sanders was concerned with the inner workings of show business and what it does to those involved. When Sanders cut to a commercial, he and the guests spoke frankly. He asked Robin Williams if he was going “to do Arsenio or Leno,” and Carol Burnett told him that she saw his balls when he wore a loincloth in rehearsal. The series burrowed into the backstage machinations and dysfunction of Sanders, his producer and his sidekick. Rip Torn was a bulldog as Artie, the show’s producer, who was based on longtime Tonight Show producer Fred de Cordova. But sidekick Hank “Hey Now” Kingsley was only possible through the imagination of Shandling and the bizarre interpretation of Jeffrey Tambor, who made Sanders look almost functional in comparison.

“That show really became a lab for the study of human behavior,” Shandling said.

Shandling had not worked much in television or movies over the past decade or so, showing up on a few late night shows or making occasional cameos in Zoolander, Iron Man 2 and The Dictator. But he remained present in comedy, doing standup and acting as a script guru for friends Judd Apatow and Sarah Silverman, who both worked on The Larry Sanders Show.

For the show’s DVD release in 2007, Shandling filmed interviews or “visits” — as the called them — with friends who had appeared on the series. The best and most organic was the one with friend Jerry Seinfeld. They talked about all those awful prefaces people use before saying what they really want to say, Seinfeld’s disdain for acting and commiserated about the process of ending highly successful series.

The two reunited on the most recent episode of Seinfeld’s web series Comedians in Cars Getting Coffee released in January. The name of the episode was “It’s Great that Garry Shandling Is Still Alive.” Shandling talked about his hyperparathyroidism and told a story about getting a CT scan and the technician being relieved that he was still alive.

The episode captured what Seinfeld and Shandling hold true — the removal of show business artifice and the search for what is most naturally funny. The old friends walked around The Comedy Store in Los Angeles and talked about their early days as stand-up comedians. They also talked about the deaths of their comedian friends David Brenner and Robin Williams, and Seinfeld lamented that they had accumulated so much wonderful material and “now it’s gone forever.”

GARRY | That material and your material is purely a vehicle for you to express your spirit and your soul and your being, and that’s why you’re fantastic. So you keep —

JERRY | So it doesn’t have any value beyond that?

GARRY | It doesn’t have any value beyond you expressing yourself spiritually in a soulful, spiritual way. It’s why we’re on the planet!