TV (The Book) is a big, grand success 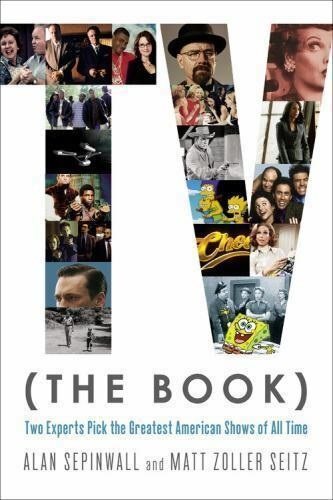 TV (The Book) begins with a lively debate between old friends Alan Sepinwall and Matt Zoller Seitz over the greatest television series of all time. Their finalists are The Simpsons, The Sopranos, The Wire, Breaking Bad and Cheers.

“But ‘greatest,’ to me, implies something else,” Seitz writes. “It signifies a restlessness, an inability to be happy with wringing variations from a particular set of themes, or within a certain framework. The word ‘great’ is associated with scale. Big. Grand. Immense. Epic.”

Seitz and Sepinwall — who met as young television critics at the New Jersey-based Star-Ledger in the late 1990s, when they wrote about a new show called The Sopranos — have produced a grand book. It is the best work of television criticism ever written and belongs on the shelf next to The Rolling Stone Album Guide (1992) and Pauline Kael’s 5001 Nights at the Movies.

They are the Lennon and McCartney of television writing. Seitz, the editor-in-chief of RogerEbert.com and the television critic for New York Magazine and Vulture.com, has the more august reputation, writing books about Wes Anderson, Mad Men and Oliver Stone in the past few years. Sepinwall, the television critic at HitFix.com, is the populist, the hardest working man in episode recaps. He wrote the essential The Revolution Was Televised about television’s recent Golden Age but also Stop Being a Hater and Learn to Love the O.C..

TV (The Book): Two Experts Pick the Greatest American Shows of All Time, which was released last month, is a ranking of the 100 greatest comedies and dramas in television history, with smart, thoughtful essays on each. The authors made the high-wire decision to measure art with numbers, judging each series on a scale from 1 to 10 in six categories: innovation, influence, consistency, performance, storytelling and peak.

There were a few rules for inclusion: (1) U.S. television shows only (2) completed shows only (3) narrative fiction only and (4) one-season shows are eligible, but with some penalties. Rule No. 3 is important, because you won’t find variety series like Your Show of Shows and Saturday Night Live or talk shows like The Tonight Show starring Johnny Carson or Late Night with David Letterman in the book.

Three coming of age series — Freaks and Geeks, My So-Called Life and Buffy the Vampire Slayer — finished tied for 25th with 94 points. Coincidence or Seitz and Sepinwall’s way of not picking that genre’s best?

They admitted to manipulating the math so that Terriers — a personal favorite of Sepinwall that was canceled after one season — finished 100th.

“There was some chicanery going on with the scores,” he said last month at the Strand Bookstore in New York. “It was always going to be in the top 100. But I was determined that it had to be 100th, because it just seemed like a Terriers thing to have happened.”

There will be disagreements with the rankings. If I may … All in the Family is only 10th? Star Trek: Deep Space Nine, Scrubs and How I Met Your Mother made the list? The Fugitive didn’t? No Leave It to Beaver?

But ultimately, the list doesn’t matter. The essays do. The authors write tributes to the shows they love. Seitz’s piece on Deadwood (ninth) and Sepinwall’s on Buffy the Vampire Slayer have been excerpted elsewhere.

But there are many other highlights, including Sepinwall’s essay on The Cosby Show and his struggle to balance the show’s brilliance vs. the rape allegations against its star:

My son looks at me hopefully and asks, “Dad, when are we going to watch another Cosby Show?”

My daughter grimaces and tells him we won’t be watching it anymore. Unlike him, she’s old enough to understand why our marathon viewing of The Cosby Show has come to an end, even if, thankfully, she’s not yet old enough to fully comprehend the sheer horror of the acts in question.

And I shake my head and wish I’d never introduced them to the show in the first place.


Seitz writes about The Andy Griffith Show as well as anyone writes about film — a treatment television series have rarely received:

Griffith’s performance hinted at a persistent sadness in Andy that could be managed only through service to his town, his friends, his family, and, most of all, his son.

Opie and Andy’s relationship is the most important one on the series. The father is always teaching moral lessons to his son — often ones that reflect on his life experiences and his desire to make his town a peaceful, sensible, decent place to live, so that his son can believe that the world is a good place despite having lost his mother before he had a chance to know her.


Seitz’s wife died in 2006 when she was 35 years old. Their daughter was 8. Their son 2. He has written about the grieving process at Salon and RogerEbert.com.

Writing about one’s favorite television show (or favorite anything) is a personal journey. Seitz and Sepinwall write about television the way that some of its best auteurs — David Chase and Matthew Weiner — make it.

They look inward to find something greater. They have made the personal universal.