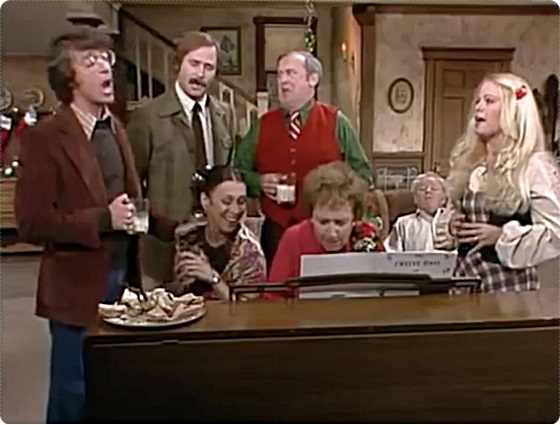 The greatest Christmas episode in television history is the story of a bigoted man from Queens who was once a presidential candidate, a Gold Star father and a country and family divided through education and generations. It aired in 1976.

During its first three seasons, All in the Family was the highest-rated and most celebrated series on television: 25 Emmy nominations and 12 wins, including three for Outstanding Comedy Series and one for Carroll O’Connor, who played working-class conservative Archie Bunker. The show was so popular and Archie so iconic that by the third season, during the 1972 presidential election, some commentators were discussing the “Archie Bunker vote” — white working class men. There was an “Archie Bunker for President” parody campaign with T-shirts, buttons and bumper stickers.

In the fifth season, the Jeffersons — the Bunkers’ next-door neighbors — moved on and up to their own series. Mike and Gloria moved next door the following season. Archie, living only with wife Edith, was losing his comic (and liberal) adversaries.

But the 1976-77 season represented a creative resurgence — a three-part episode about Archie kissing a waitress, a two-parter about him losing his job and another two-parter about his gallbladder operation. Then, on Christmas night, CBS aired the Emmy-nominated “The Draft Dodger,” an episode about Christmas dinner, secrets and changing the subject.

Written by Jay Moriarty and Mike Milligan and directed by Paul Bogart, “The Draft Dodger” reverse engineers the typical All in the Family episode, backloading the conflict to the second act. This one is all foreshadowing and foreboding and avoidance. Archie and Mike — who mined political shouting matches for groundbreaking comedy for eight seasons — want the same thing: peace for their guests, who are without family on Christmas.

There’s an old saying: Don’t discuss politics, religion or sex at dinner parties. Or Christmas. Change the subject. Joke it up.

Archie is dreaming of a light Christmas. His guest is old friend and practical joker Pinky Peterson. Mike’s guest is unexpected: David Brewster, a high school friend from Chicago now living in Canada.

When Edith asks David to dinner, only Mike understands the gravity of the invitation. Because being treated like one of the family — at 704 Hauser Street or anywhere else — is a fool’s bargain. It means a home-cooked meal and uncomfortable questions. And later, when David says “I’m just your friendly fugitive from justice,” a sense of dread falls over the episode. A sense that Archie will find out the truth.

Mike warns David about Archie, then stops his friend from leaving: “He’s not going to call the FBI or anything. Just steer clear of any subjects that might cause friction. Like politics or religion. Sex … books … movies … war … peace … guns.”

When Archie asks David where he is from, Mike and Gloria avoid the question. He’s from out of town. Up north. A little north of Niagara Falls. “Oh, he’s from Canada,” Edith says, and Mike changes the subject.

Archie has a secret, too — at least something that he doesn’t want to be mentioned tonight. “On holidays, Pinky sometimes, he gets feeling a little low, you know,” Archie says, because his son was killed in Vietnam. Mike and David look at each other like they would both rather be in Canada. “Joke it up, now,” Archie says before answering the door. “Joke it up.”

The first act ends with Pinky and David shaking hands, an introductory gesture between a father who has lost his only son and a young man estranged from his father. A gesture that later would be more hard-fought.

The second act is set almost entirely at the dinner table, where secrets are never safe. The dinner table is a trap. It’s every family’s interrogation room, and Archie is this family’s cop.

When Pinky begins a story about Steve’s funny letter to Santa Claus, Archie tries to change the subject. When Archie presses David about why he is living in Canada, Mike interrupts him. Then, when Archie has almost burrowed into David’s truth, as the tension builds and Gloria asks her father to stop, Pinky says: “Let’s change the subject.”

Archie presses David, and the viewer gets the same feeling Edith, Mike and Gloria must have had at that table, that nervous, pit of your stomach feeling that complicates digestion. “I’m a draft dodger,” David says, sucking the air out of the room.

It is the beginning of another political shouting match between Archie and Mike.

“When are you going to admit that the war was wrong?” Mike yells.

“I ain’t talking about that war,” Archie yells back. “God dammit. I don’t want to talk about that god damn war no more. I’m talking about something else …” It is the angriest Archie ever was. His arms flailing about, working up a sweat. Those piercing blue eyes. A final litigation of the war in Vietnam, where more than 50,000 Americans died.

Pinky interrupts him. “If my opinion is of any importance …”

Eugene Roche, who played Pinky, was one of those slightly overweight veteran character actors. The kind of guy you know you’ve seen somewhere. He performed on Broadway next to Anne Bancroft and Helen Hayes and played pivotal roles in The Late Show (1977) and Foul Play (1978). But nearly all of his 142 credits on IMDb are guest appearances on television series — from Car 54, Where Are You? in 1962 to Starsky and Hutch, Kojak, Soap, Night Court, Magnum, P.I. and about 90 more, ending with 7th Heaven in 2004. He was Bill Parker in 50 episodes of Webster. He may be most famous as the “Ajax Man” in those dishwashing liquid commercials the 1970s. But Roche’s stand-up job in “The Draft Dodger” was his finest moment:


Pinky reaches out his hand to shake David’s, a more earned gesture this time, bridging a generational divide that Archie and Mike never could.

Archie walks around the table, inconsolable by Edith’s plea for him to eat. There’s a funny bit in which he shoos carolers away from the house. “I don’t want to have to call the cops,” he says. He closes the door, revealing a wreath that reads: “PEACE.” For everyone, except Archie.
— Kevin Brewer