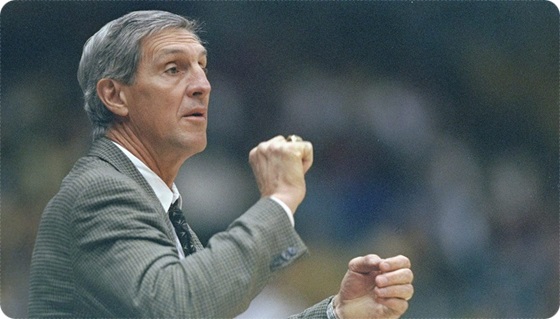 Jerry Sloan was all those stories told by grandparents everywhere. He grew up on a farm in Gobbler’s Knob, about 16 miles from McLeansboro, Ill., the youngest of 10 children. His father died when he was 4 years old. His elementary school was one room. Basketball practice was before school — and after school. He hitchhiked home every day.

Sloan fought his way out of that hardscrabble rural town, leading Division II Evansville to consecutive national titles. He became a six-time All-Defensive team guard with the Chicago Bulls and then the longest-tenured coach in professional sports with the Utah Jazz. Sloan, who won 1,221 games and led the Jazz to two NBA Finals, died on Friday. He was 78 and had suffered from Parkinson’s disease and dementia.

“He was a mentor for me from afar until I got to know him,” Spurs coach Gregg Popovich said. “A man who suffered no fools, he possessed a humor, often disguised, and had a heart as big as the prairie.”

After one season with the Baltimore Bullets, Sloan was selected by the Bulls in the 1966 expansion draft. The 6-foot-5 shooting guard made two All-Star teams and averaged 14.7 points and 7.7 rebounds over 10 seasons. Sloan teamed with Chet Walker, Bob Love and Norm Van Lier to lead the Bulls to four 50-win seasons and two Western Conference Finals. He retired as the team’s all-time leader in games played. His No. 4 was the first number retired by the franchise.

“Jerry Sloan was ‘The Original Bull’ whose tenacious defense and nightly hustle on the court represented the franchise and epitomized the city of Chicago,” Bulls chairman Jerry Reinsdorf said. “Jerry was the face of the Bulls organization from its inception through the mid-1970s.”

Sloan and Van Lier are the best defensive backcourt of all time. They were selected to the All-Defensive first or second team in the same season three times — the most of any backcourt. Gary Payton and Nate McMillan (SuperSonics) did it twice, Sidney Moncrief and Quinn Buckner (Bucks) and Tony Allen and Mike Conley (Grizzlies) once each. But Sloan and Van Lier were the toughest and most ready for a fight. Once, when a fan threw an aerosol can into the Bulls huddle, they both entered the stands to “let the guy know we didn’t want him to throw any more of those.”

“He’d get in your jockstrap and ride you all the way downcourt,” Hall of Fame center Bob Lanier said. “Some people might have called him dirty. I think he took it to the edge. He would do whatever it took to win — by any means necessary. If it took hugging you, tripping you, pulling you.”

Sloan once said of his style of play: “I was fighting for my life and family.”

Sloan won most of those games with pick-and-roll artists John Stockton and Karl Malone, forming the most durable coach-player-player association in league history. In the trio’s 15 seasons together, the Jazz posted the best record in the league. They were efficient on offense, borderline dirty on defense. Stockton and Malone were selected to a combined 23 All-NBA teams and eight All-Defensive teams. They missed 31 total games.

The perception became that the Jazz ran only pick-and-roll sets. There were also a few UCLA cuts. In fact, one exhaustive study found the Jazz ran just 10 different plays during the 1990s, although some were probably just different reads of the same play. 10 plays in a decade. What seems like a high number for the Jazz would be a low one for any other franchise.

Pat Riley said it was the “best offensive system I’ve ever coached against.” Flip Saunders called it “meat and potatoes basketball.” Traditionalists admired the Jazz. Younger fans found them boring. As boring as a precision timepiece, as reliable as the Utah sunrise and as old-fashioned as those antique tractors Sloan worked on in the offseason.

After Stockton and Malone, Sloan developed other players: Russian wunderkind Andrei Kirilenko, pick-and-roll progeny Deron Williams and Carlos Boozer, Mehmet Okur, Paul Millsap and Ronnie Brewer. Talent, of course, was not a prerequisite. Sloan might have been the only coach to find the gritty charm in players like Greg Ostertag and Adam Keefe.

“Coach allowed me to flourish and take my game to another level,” said Boozer, who made two All-Star teams under Sloan. “As ferocious as he was on the court and sidelines, off the court he was thoughtful and kind.”

Sloan remained fighting tough into his 60s. The same guy who squared off against Wilt Chamberlain in the 1970s also wanted a piece of Dennis Rodman, Rasheed Wallace and Jerry Stackhouse. He served a seven-game suspension for shoving referee Courtney Kirkland in 2003. He was called for more than 400 technical fouls.

After he retired as a player, Sloan was named coach at Evansville — in their first season in Division I. But he resigned five days later for personal reasons. Later that season, on Dec. 13, 1977, the plane carrying the team and coach Bobby Watson crashed shortly after takeoff, killing all 29 passengers.

“That incident made me realize that there are things more important than basketball,” Sloan said in his Hall of Fame speech in 2009, “even though I love this game and will always be grateful for what it has given me.”
— Kevin Brewer