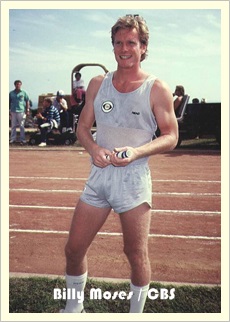 Scouting report | Played football in high school until he dislocated his hip.

Greatest Battle | Battle XV, December 1983. He won the obstacle course and led CBS to wins in the swimming relay and kayak relay. Also had two touchdown catches and one interception in the football game.

Epilogue | Moses married Battle rival Tracy Nelson in 1987. They divorced 10 years later. He has co-starred in 22 Perry Mason television movies and appeared in more than 30 other made-for-TV movies.
Email ThisBlogThis!Share to TwitterShare to FacebookShare to Pinterest