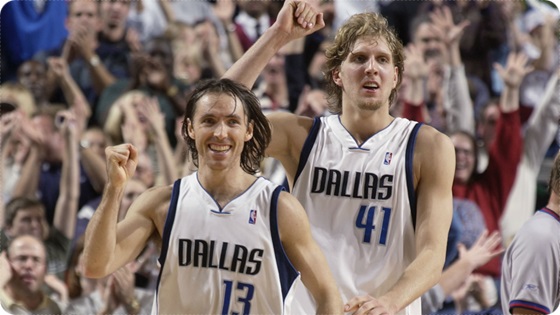 For the Warriors, the Celtics and the entire von Trapp family, here are a few of our favorite teams:

Chapman, Tripucka and Stephen’s dad at play
Teal and dark purple and projects colored Gray
Big men who scuffle and Hornets that sting
These are a few of my favorite teams

A young, fun and gun team on the make and ahead of its time: 3-pointers in transition, three-guard lineups, nine different zone defenses — and Dirk Nowitzki and Steve Nash before they were MVPs. Nowitzki was the 7-foot shooter with no position, Nash the playmaking guard. Michael Finley and sixth man Nick Van Exel were the wingmen, 7-6 Shawn Bradley the wingspan. The Mavericks started the season 14-0 and finished 60-22 (tied for the league’s best record). They led the league in margin of victory, offensive rating — and originality. “Nobody’s ever tried it this way before,” Don Nelson said. — K.B.

Were this series about a different superlative, accounts of defensive efficiency or per-100 ratings might occupy this space. Instead, we’ll note Champion-manufactured NBA jerseys from 1989 to the early aughts. Among the millions of replicas produced: home and away Latrell Spewells, my favorite player on my favorite team. Three of note: Sprewell, absolved by all, except P.J. Carlesimo and those with families to feed; Marcus Camby, loved by all, except Danny Ferry and Jeff Van Gundy; and Larry Johnson, who helped send the Pacers home on a shot Mark Jackson still complains about.
— Robert H. Quesenbery

Coming off their first NBA Finals loss to the Lakers after eight victories, the Celtics responded with perhaps their best season, rolling to a franchise-best 67 wins and a league-record 40 wins in 41 home games. They then rolled through the playoffs with only three losses, two of those coming against a Houston team that upset the Lakers in the Western Conference finals. With league MVP Larry Bird leading the team in points (25.8), rebounds (9.8) and assists (6.8), Boston led the NBA in rebounding, defensive efficiency and 3-point shooting while ranking second in assists and third in offensive efficiency.
— Jeff Drew

The Charlotte Hornets were a nondescript team in the franchise’s sophomore year. But I can quote almost every one of their results back to you from memory. My favorite was the night Stuart Gray battled the entire Los Angeles Lakers entourage. I was there. “He went after everyone in the facility,” Magic Johnson said later. In a few weeks, both Gray and his rabbi, coach Dick Harter, were gone. Allan Bristow brought in Armen Gilliam and Rudy Keys, and the Hornets — before Grandmama, before Alonzo Mourning — became a force.
— Owen S. Good