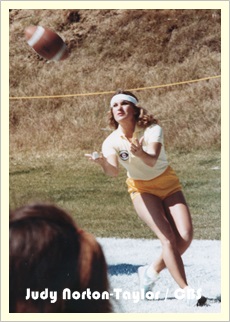 Signature events | Obstacle course and 3-on-3 football. She won the obstacle course three times and holds the all-time record for touchdown catches with five.

Greatest Battle | Battle IX, December 1980. Arguably the greatest performance in Battle history. On the first day, she helped CBS win the swimming relay and kayak relay and scored two touchdowns in the 3-on-3 football game but suffered a broken finger on a deflected pass. The following day, she returned to win the obstacle course, running relay and tug of war.

Epilogue | Norton-Taylor posed in Playboy in August 1985. She participated in two world records in skydiving the following year. She is still acting and living in Los Angeles.
Email ThisBlogThis!Share to TwitterShare to FacebookShare to Pinterest